" Music is a world within itself, with a language we all understand. "
~ Stevie Wonder 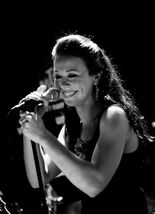 Laura Aussems (1990) grew up in Belgium in a musical family. Her grandmother performed in opera plays and her mother and grandmother are directors of local church choirs. Laura had no choice of being part of the choirs and felt music and especially singing was gonna play a big role in her life after.

At the age of 8, she started taking music and dance classes, and playing the flute traverse at the local music academy. She won the prize of the best music student graduating from the music academy of Voeren in 2008.
At the age of 12, she started singing classes and explored different styles after. Classical , jazz, pop and musical theatre from vocal coaches such as Ann Debaillie, Priske Dehandschutter, Imke Heitzer.

In 2008 Laura traveled with "Up with People", an international singing and dancing organization, and performed 80 shows in the US, Mexico and the Philippines. This was an amazing experience for her and broadened her view personally as well as musically.
In 2012, Laura started at the "MusicAllFactory" in Tilburg (The Netherlands) with singing, dancing and theater classes from Ingrid Zeegers, Harry Ruijl, André van Hest, Annerieke Groen, Agaath Verspeten en Edward Hoepelman. She performed in Matilda (Amanda) and Alice in Wonderland (dance ensemble).

Laura has been part of a hiphop theatre dance production team in Amsterdam (Netherlands) choreographed by Gianni Grot (SYTYCD) and is coached in styles such as popping, house and hiphop by Obelixx (OPF, Obelixx Popping Factory) in Antwerp (Belgium).

In 2015, Laura participated in the well-known TV talent show "K3 zoekt K3" in Belgium and The Netherlands to become a member of the girl group K3. Out of more than 6000 applicants, Laura got to the last 10 girls. This was an amazing adventure for Laura and she enjoyed performing LIVE on TV more than anything else. She had the chance to work together with a great team of Studio 100, VTM, SBS6 and TV Bastards.

On the 27th of November 2015, Laura released her first self-written single & music video of "Back-Up" independently. The song is about having someone who supports you and being a support to someone else. Laura wants to tribute this song to all the fans who supported her at the start of her solo career. Laura was able to work together with a talented team existing out of a recording engineer, mixer/master, designers, video producer, photographer and MUA. The music video of "Back-Up" got 16K views in 24 hours, which is an incredibly promising start of the solo career of singer-songwriter Laura Aussems.